In this increasingly warped universe where you never know where the next viral phenomenon will emerge, Weird Al Yankovic (musical parodist from the late 1970s) may have done more than he intended with his latest video parody, “Word Crimes”  (set to Robin Thicke’s “Blurred Lines” and with 12.5 million views at this posting.)

Although linguists are having a hey day critiquing Weird Al’s satirical take on our generation’s errant grammar (it’s true), they may be missing the greater message – or warning – to “wise up” and “listen up.”  This new world of online social communications is having an impact on how we are perceived and maybe even on our school and career trajectory.   Consider his opening lines (minus the hey, hey, heys and woos):

If you can’t write in the proper way, (lousy writer!)

If you don’t know how to conjugate,

Hey!  Maybe you flunked that class!

And maybe now you find,

Hidden amongst all the jazzy graphics and word play, Weird Al implores, “make literacy your mission,” and “show the world you are not a clown.”

So, are we the most inarticulate generation to come along?

While I always think it’s a “Good time to learn some grammar,” much of what Weird Al is parodying are not “Word Crimes,” but new forms of digital communications that are transforming how we converse with friends and family alike.  We are not “incoherent,” we just need to figure out how and when to use these new forms and for what purpose.

Take text messaging (or SMS – short message service). While I’m not a fan of all those additional letters that try to underscore a point (paaarrrttyyy!!!), and the misspellings that might be cute (peepl), I do give the thumbs up to the inherent convenience and time-efficiency of replacing words with one letter (“are” with “r”) or replacing letters with numbers (gr8!) – perfectly appropriate for a quick check in with friends and family; but not perfectly appropriate in a college essay or a job seeking cover letter.  And, those OMGs, LOLs, and BRBs are IMO (in my opinion) creative, trendy, sometimes crude, and often times hilarious.

Are you fluent in emojis?  Using Emojis, or replacing words with characters, is lots of fun and here to stay as described in this Jessica Bennett NY Times story, “Emoji Have Won the Battle of Words.”  According to Bennett’s research, the website Emojitracker finds that people are averaging 250 to 350 emoji tweets a second!  And “emoji” was crowned as this year’s top-trending word by the Global Language Monitor, and was added to the Oxford English Dictionary.  But what I find most exciting is emoji’s potential to break down cultural language barriers.  If enough characters are created and standardized, this new symbolic system could be used to communicate no matter what language you speak.

And then there are #hashtags. Although hashtags were created as searchable, group-able, metatags to be used in social marketing channels (e.g. Twitter, Instagram), you’ve no doubt noticed that they have taken on a life of their own, as spoofed in this clip of Jimmy Fallon and Justin Timberlake, “#Hashtag” which, at the time of this posting, had 25,362,548 views! 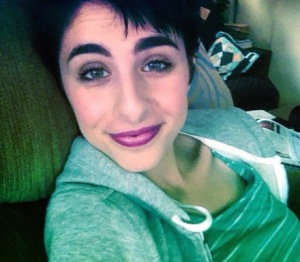 My 21-year-old-niece is known by her friends as “The Hashtag Queen.”  As a proud and clever Millennial, she, like her peers, has turned hashtagging into a speaking style, and maybe even a new art form.  Here’s an example of one of her recent, spontaneous Instagram hashtag “poems”:

Having a good eyebrow day.

But here’s the thing…how do we resolve all of these new forms when it comes to school and career?  Do text messages, emojis and hashtags have a place in communications when we want to impress?   When we want others to listen up?  And, how about in our professional lives?

My son’s religious-school teacher is brilliant, a terrific storyteller and has her own successful blog.  Over dinner, she told us that her fiancé recently accused her of “still speaking in her text voice,” (she admittedly threw an OMG into their conversation).  Can she blame it on teaching kids all day?

This spurred on a conversation about using your “text voice” in the work place.  She had been put in charge of reviewing resumes from potential job applicants.  “Some were great,” she said, “But the text speak has infiltrated their resumes.  Some really needed to review their grammar, get rid of the casual speak, and understand that ‘Btw’ doesn’t belong in a resume.  And, when it came to the job applicant’s voice messages, I’m not sure that they were ever taught how to use a phone.”

(What is the deal with the telephone and kids’ inability to use this old-school contraption for a productive conversation?  I’ll get to that in my next blog…)

So, Thank you Weird Al for a gr8 video, chock full of great advice.  It’s true.  We all need to “familiarize ourselves with the nomenclature” and stop using verbal tics like, “like.” But no Weird Al, it’s not a crime to play with syntax, emoji or LOL.  Truth be told, we are now living through a sociolinguistic transformation brought on by the ubiquitous Internet.  And, like most things in life, there is a time, a place and a hashtag.

I’d love to hear your thoughts and stories.  Feel free to post your comments – all forms accepted!