As the year wraps up, we are rich with pop-culture rankings including Vanity Fair’s 10 Sexiest Captain Hooks, Paste Magazine’s The 15 Best Monkeys and an annual favorite the Top 10 Worst Celebrity Role Models, which includes the likes of Rhianna, Miley Cyrus, and the Kardashians and their trend-setting ability to put appearance, money, promiscuity, and ego above substance, smarts, charity and accomplishment.

Turns out, these same celebrity role models have a powerful impact on the way young girls and women speak; the way we present ourselves to the world.  And, as has been my 2014 mantra, we need to empower girls and women to find their own authentic voice; to…like, umm, you know…. stop hedging, using fillers, and speak with confidence and conviction.

So, for this 2014 wrap up, I thought it was time to offer our girls a “best of” with 10 impressive female role models who also happen to be articulate, clever and inspiring.

I want to grow up to be just like all of them.

“If you retain nothing else, always remember the most important rule of beauty which is: who cares?

Comedian, actress, writer, producer and dedicated mom Tina Fey was not only the third female winner of the Mark Twain award in 2010, but also the youngest ever.  In her 2011 bestseller “Bossy Pants,” she nails it with her, “A Mother’s Prayer for her Child,” offering hilarious and well-heeled wisdom on raising a daughter.  She is a formidable presenter, and will again be with her sidekick Amy Poehler (another of my picks) leading the ceremony at this year’s Golden Globes.

We were all moved and empowered by Emma Watson’s speech as the UN Women’s Global Goodwill Ambassador where she launched her “he for she” campaign – the first of its kind for the UN to end gender inequality and involve and galvanize men and boys to be advocates for change.  We loved watching her grow up as Hermoine Granger in the Harry Potter film series, and now, at 24, she is making her mark as an advocate for ending inequalities for women around the world. 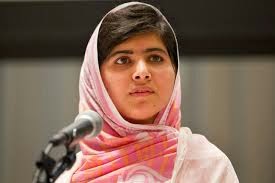 “I raise up my voice-not so I can shout but so that those without a voice can be heard…we cannot succeed when half of us are held back.”

Is there anyone more inspiring, fearless and exemplary than Malala Yousafzai?  She is the youngest recipient of the Nobel Peace prized, awarded to her this past July 14, (on her 16th birthday), where she took to the United Nations’ world stage demanding that world leaders provide free education to all children.  We all stand in awe.

“I hope that my presence on your screen and my face in magazines may lead you, young girls, on a beautiful journey.  That you will feel the validation of your external beauty, but also get to the deeper business of being beautiful inside.”

Lupita Nyong’o shows us that you don’t need to be brash and loud to have a commanding presence. She is a skilled, articulate, gracious and sincere communicator.   In her acceptance speech at the Academy Awards she told us, “No matter where you’re from, your dreams are valid.”

“Do not bring people in your life who weigh you down. And trust your instincts … good relationships feel good. They feel right. They don’t hurt. They’re not painful. That’s not just with somebody you want to marry, but it’s with the friends that you choose. It’s with the people you surround yourselves with.”

Our first lady is a class act.   She always presents herself with strength of purpose, a sense of style, and a sense of humor.   If anyone can deliver the message effectively to teens that the key to success is staying in school, staying away from drugs and delaying children until after marriage it is Michelle Obama.

As a powerful and passionate advocate for girls’ and women’s rights globally, Hillary Clinton has often said that there cannot be true democracy unless women’s voices are heard. If you want to learn how to deliver a great speech, Hillary Clinton is prolific and inspiring and there is a whole web site dedicated to her best speeches.  Most recently, she accepted an award from the Robert F. Kennedy Center for Justice and Human Rights where she spoke out against terrorism and for justice and basic human rights.

“As Eleanor Roosevelt once said, ‘The destiny of human rights is in the hands of all of our citizens and all our communities.’ We must send a message across the world that there is no disgrace in being a survivor of sexual violence; that the shame is on the aggressor.”

In June, actress, filmmaker Angelina Jolie showed us once again that she is more than just an insanely beautiful woman. As a UN Special Envoy, she bravely spoke out at the Global Summit to End Sexual Violence in Conflict. Jolie promotes humanitarian causes, and is noted for her work with refugees as a Special Envoy and former Goodwill Ambassador for the United Nations High Commissioner for Refugees (UNHCR).

“If you’re offered a seat on a rocket ship, don’t ask what seat! Just get on.”

As the COO of Facebook, the one monetizing the world’s largest social network, Sheryl is the only C-Level executive on my list (Other great role models include GM’s Mary Bara, HP’s Meg Whitman and Yahoo’s Marissa Mayer).  Even with such a massive job, Sheryl seems to find the time to teach and provide support for women and girls to “lean in” and achieve their goals.  At this year’s Harvard Commencement address she told girls to “dream bigger – both for yourself and the world around you.”

“Change the world by being yourself.”

Actress, writer, director, producer and funny woman Amy Poelher is actively using her talent and position to empower girls to “celebrate your truest self.”  Along with two of her “besties,” she created the web series “Smart Girls at the Party” and has a great site, an Instagram (amypoelhersmartgirls) and Facebook page  where you can become a part of the greater Smart Girl community, engage in volunteerism, civic activism, cultural exchange, and self-expression through the arts.

“Follow your passion. Stay true to yourself. Never follow someone else’s path unless you’re in the woods and you’re lost and you see a path. By all means, you should follow that.”

Ellen Degeneres’s joy is contagious. She is the hallmark of a brand of comedy that doesn’t need to default to foul language to get a laugh. Ellen is kind and funny and all about “being true to yourself.” In 1997, she came out as gay and has become a staunch advocate of LGBT rights.  She is also a huge proponent for animal rights.

Who inspired you this year?