“Like” in Every Language: Is it Just American-Speak or do Filler Words Cross the Borders?

Could it be that the “like, ya know syndrome” has gone viral and global?

At my last Say it Like You Mean it panel presentation, an audience member asked whether the American epidemic of peppering our speech with filler words was also an issue in other cultures and languages? I decided to do some digging to decode the Rosetta Stone for filler words and find out if people around the world are also guilty of an unconscious compulsion to riddle sentences with “um,” “like,” “ya know,” “whatever,” “so,” etc. 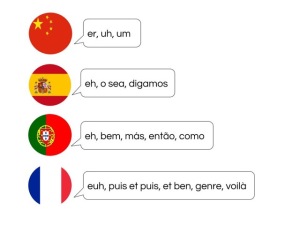 It turns out the answer is yes, or rather “si,” “oui,” “sim” and “shí,” at least in Spanish, French, Portuguese and Mandarin.  Fillers – those meaningless words, phrases, or sounds that mark a pause or hesitation in speech – are pervasive, contagious and seem to infiltrate many, if not all, languages.

Just last week, my daughter’s high school Spanish teacher, Señor Warren, dedicated a lecture to teaching the students about filler words. He explained that if the students were unable to avoid using fillers, to sound authentic, they’d at least better use the Spanish versions, or the “muletillas.” According to Señor Warren, the most common filler words are “eh” (um), “o sea” (like), “y digamos” (let’s say).

It turns out that the French use filler words too. My friend Bene texted her sister, a middle school teacher in France, and she confirmed that her students use fillers all the time. The most popular are “euh” (um or ah), “puis et puis” (then and then), “et ben” (and then), “genre” (a pejorative to express someone that pretends to know everything), and a word most of us here know, “voila!” Along with fillers, Bene’s husband claims that when the French speak, they also make all kinds of indiscriminate sounds. Bene, “ah,” “uh,” “em”… reluctantly agrees.

My Digital Daughter Alexandra is of Portuguese descent and summers in Portugal. She told me that Portuguese has its own set of fillers. “With my cousins and friends, I’ve noticed that they use filler words including, ‘eh,’ ‘bem,’ ‘más,’ ‘então, ‘como,’ which mean ‘eh,’ ‘well,’ ‘but,’ ‘then,’ and ‘like,’ respectively. I haven’t noticed many vocal habits, but I have noticed that some people do constantly apologize, myself included.”

A Portuguese grammar reference site explains that, “More than any other set of words or phrases in the language, filler words will show other Portuguese speakers that you feel comfortable with and confident in your language skills. To Portuguese speakers, they will not be a mark of linguistic intelligence, but a mark of fluency in everyday conversation.”

And what about if we head out of Europe and travel to the Far East? My friend Ying confirmed that the Chinese do it too! “We do have a lot of filler words in Mandarin.  Some of them even sound like the English ones, for example, er, uh, um, etc.  And, many of them have similar meanings to English fillers including “ya know”, “right” and “okay,” but in Mandarin pronunciations.

Filler words can be helpful in making our sentences more fluid and filling awkward pauses.  But, used excessively, these verbal habits can weigh down our sentences and water down our meaning. And perhaps, most importantly, distract, confuse and turn off the listener – be that a stranger, friend, colleague or potential boss – where ever they hail from in our multi-lingual world.

For those of you that grew up in the 1980s, you probably remember the phenomenon of Valley Girl Speak, “Like, I’m so sure!”  It appears that this mindless repetition of filler words has not only become more pervasive, but is now a verbal fashion trend.  Most everyone I know in Generation X, Y and Z (myself included) has a case of the “like, ya know syndrome.”  The good news, however, is that there is nothing pathological involved (although sometimes it can seem so.)  The use of filler words is a verbal habit, and like all habits, the fix is in building our awareness and practice, practice, practice.

So there you have it.  From the U.S. to Europe to Asia, we are united in our shared use, and over-use, of filler words – with “like” seemingly winning “The Filler Word Award” as the most pervasive of them all. And Valley Girl Speak, and its linguistic influences, has not only made it into the 21st century, it has gone global, crossing borders near and far.