Let me establish upfront, I’m all for “Leaning In.” But listening to how young women (and men) communicate today in this Kardashian-infested culture gives me pause.  Maybe before we all lean in, we need to…. like, you know, umm…. stop hedging, using fillers and vocal fry and speak with confidence.

Sheryl Sandberg’s brilliant, “Lean In,” and recent “Lean in for Graduates,” and Kitty Kay and Claire Shipman’s “The Confidence Code,” offer empowering words of truth worthy of putting into practice and pinning on your wall.  How about this for a new mantra?  Say it like you mean it.

Fillers or verbal tics can weaken our speech, making us sound unsure, and yes, maybe uneducated.  Whether a teen-ager is giving an oral presentation in class, a high school student is interviewing for a summer internship or with a college recruiter, a young woman (or man) is undergoing a job interview, or is charged with engaging colleagues at a meeting, sounding self-assured and articulate is paramount to being taken seriously.

A colleague of mine was telling me how she has two brilliant, highly educated female co-workers, but that she often cringes hearing them on calls and in meetings.  She has wanted to pull them aside and impress upon them the importance of not peppering their speech with mindless repetition of filler words and the verbal uptalk – the upward glide that ends what should be statements or proclamations in a question mark.  “In today’s meeting, I think, you know, we need to discuss a new strategic direction for our client?” (What is heard?  I’m not self assured and not capable of running this meeting.)

This issue has become my baby, which is probably why it came up at my recent gynecology appointment (and if I weren’t in a compromised position, I would have taken notes!).  My doctor, a top practitioner in her field, told me emphatically that she too has experienced this, even in the operating room.  She said that fellow women surgeons weaken and clutter their speech to try to gain consensus and likeability.  So the command, “Scalpel” will turn into, “If you don’t mind, could you please hand me the scalpel?”   Not only are the extra words unnecessary, but in a high stakes medical situation, they don’t inspire confidence.

I first became aware of this challenge growing up in suburban New York, where the popular boys called themselves “The Hair Gang.” They would end virtually every sentence with, “ya know,” show their toughness with expressions like, “In your face!” and shout “Nnnnaaa” in unison at the lunchroom table and at sporting events (a male battle cry of sorts, though I’m still unsure of the meaning).  The girls would sarcastically say, “yeah, right,” “whatever,” and “as if!”  But as a country, it was Valley Girl speak that plagued us (“Those shoes are like totally last season!”) It took a concerted effort to protect oneself from falling prey to this verbal epidemic.

Now, 30 years hence, I find myself with teen-agers of my own, privy to the current slang and fillers. Thankfully, although my girl can do a spot-on imitation, she has not caught the Britney bug, the Kardashian croak, the Kesha lazy, drawn-out twang (what YouTube’s Abby Normal calls “The Vocal Fry Epidemic” https://www.youtube.com/watch?v=UsE5mysfZsY.) But, the “likes,” “ya knows,” “umms” and “ahhs” are there, and although I can blame her peers, she probably caught some of these verbal tics from me (but, like, I don’t know how?!).

Vocal fry, the low, staccato vibration during speech that arises mostly at the end of sentences, even manifests itself in teens’ online social conversations; particularly in text messaging.   A greeting of “Hey,” is a two syllable. “Heyyyy,” “Party” is “Partayyyy,” “Damn hottie” is “Ddaaaaayyyuuuummm Hottie,” and even OMG has a few extra G’s, “OMGGG!”

Jimmy Fallon is on it.   On Late Night with Jimmy Fallon his “Ew!” sketches poke fun at teen-age girls, and this trend of verbal fry https://www.youtube.com/watch?v=HOK4aBYNh3s .  “Exercise?  Kale chips?  I can’t!  I can’t even!  EW!”

It goes way back… If you’re a Broadway baby, or as old as I am, you may recall that in My Fair Lady, the turning point is when Professor Higgins and Colonel Pickering drill Eliza Doolittle incessantly with phonetic speech exercises, trying to rid her of her Cockney accent. It all works itself out when she starts singing the exercise, the key lyric being “The rain in Spain stays mainly in the plain.” 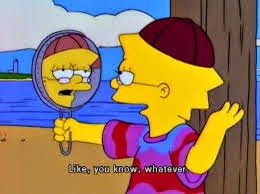 Verbal traps start early; as early as elementary school and middle school, perhaps when you are most influenced by peers and celebrities, and the when fitting in matters most.  Even little Lisa Simpson, the brain of the dysfunctional Simpson bunch, calls on these verbal crutches to fit in with the cool crowd. http://www.youtube.com/watch?v=21lTu6FrTmk

In poetry slam artist and author Taylor Mali’s “Totally like whatever, you know,” http://www.taylormali.com/poems-online/totally-like-whatever-you-know/,he writes:

In case you hadn’t noticed,

it has somehow become uncool ,

to sound like you know what you’re talking about?

Or believe strongly in what you’re saying?

have been attaching themselves to the ends of our sentences?

Even when those sentences aren’t, like, questions? You know?

because they used to, like, DECLARE things to be true, okay,

as opposed to other things are, like, totally, you know, not—

have been infected by a totally hip

Like, don’t think I’m uncool just because I’ve noticed this;

I have nothing personally invested in my own opinions, okay?

I’m just inviting you to join me in my uncertainty?

Taylor Mali nails it.  But, changing right brain habits is always a hard task, and when it comes to communication and peer pressure, it takes vigilance and repetition.  Teachers deal with this issue all the time.  My friend Marci’s daughter’s 7th grade English teacher made a competition out of it.  She asked her students to speak for one minute on a topic of their choosing, without the fillers – a challenge to see how many, if any, could do it. They quickly realized how often those fillers make it into their speech and how very difficult it was to remove them.

My girlfriend, who happens to be a 5th grade English teacher, had this to say: “Definitely, in my classroom, the quietest voices belong to the girls. Girls subconsciously or consciously speak in a way that lessens the power of what they are saying.  As for the boys, perhaps to lessen their accountability, they mumble, talk really fast, or qualify their ideas with, “what I mean is…”

Although I’m not sure that my primary and secondary education had me speaking to impress, thankfully, as a communications major at college, the skills associated with the written and spoken word were drilled into me.  But, as a new employee at Hewlett-Packard (my first “real” job) – where men filled virtually all of the top spots – I quickly realized that not everyone was on board.  I distinctly remember being appalled when at my first company meeting; the regional general manager gave a speech that was riddled with grammatical mishaps and fillers.   It was embarrassing and frankly, shameful.

I reached out to a few speech-language pathologists (SLP’s) to learn more.  It turns out there is a field dedicated to studying how language serves and is shaped by the social nature of human beings called sociolinguistics.  According to SLP Marci Macaluso, “We are so busy bonding and wanting to be part of the ‘tribe,’ that we don’t realize how habitual these verbal crutches becomes and how they take over our speech and the way we present ourselves to the world. There are psychological and behavioral issues behind these speech patterns and with speech modification, there are different strategies we can use to successfully reshape these behaviors.”

With my own communications consultancy http://www.manncroninpr.com, Say it Like You Mean it is, and has always been, my tagline. I am constantly mindful of how my colleagues and clients “sound.”   In my business’s arsenal of tools, we use speaker training to teach executives how to best communicate their company’s expertise.  Why?  Because every time an executive clips on a microphone, is faced (online or off) with a reporter, or speaks at a conference, their company’s reputation is on the line.

The fact is, to “lean in,” everyone could use speaker training. Corporate world or private sector; politician, marketer, retailer, social worker, engineer or doctor – no matter what our chosen profession – to show our best selves, we don’t just need to dress for success.  We need to speak to impress.

Back in February of 2012, the New York Times did a piece entitled, “They’re, Like, Way Ahead of the Linguistic Currrve,” positing that girls and women in their teens and twenties deserve credit for pioneering vocal trends and popular slang.  Maybe so, but I think we are in a danger zone.  Among friends and family members, this “Linguistic currrve” may be okay.  But, girls and young women, who even in 2014 are challenged by our male-dominated business world – and still earn 70 cents to the dollar – need to demonstrate competence, assert power, and be taken seriously.  Like, ya know…I think we need to Say it Like We Mean it.

I’d love to hear your stories.  Do YOU suffer from the “like” syndrome? Tend to speak in questions or apologize or downgrade your thought before you even get to the point (“This might be wrong, but…)?  Have you seen these issues in your own career/world?   Tried (successfully or unsuccessfully) to remedy the issue? Please fill me in…and look out for an upcoming panel discussion on September 18th that will offer insight, tips, fixes and dig deeper…